CMW Demonstrators for March 2018 were Warren Carpenter and Jim Duxbury

Long time members Warren Carpenter and Jim Duxbury were called upon to demonstrate at the March 17, 2018 when the scheduled demonstrator was not available.

Alan Carter introduced both Warren and Jim at the meeting and prepared a limerick for each of them:

Our friend Warren’s making a bowl

A perfect shape, that’s his goal

But if it’s not going his way

He’ll shrug his shoulders and say

He’s not what you would call proper and prim

But if his demo’s a bust

And his project turns to dust

His visage will become quite grim

Warren Carpenter demonstrated turning natural edge cherry bowls in the morning. Additional information about Warren and details about his technique can be found in an article about a similiar demonstration in the February 2016 article link here: http://www.carolinamountainwoodturners.org/articles/524 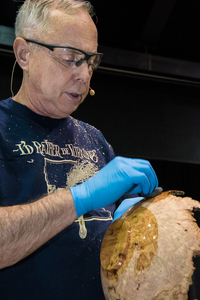 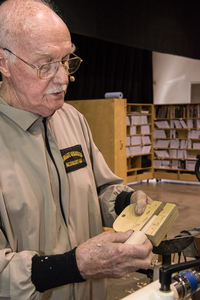 Jim has demonstrated several times for CMW and more information about him can be found in the January 2012 article here:

If you would like to learn about other Demonstrators who have appeared at CMW use the search function link below: http://www.carolinamountainwoodturners.org/articles/search?search%5Bmeta_sort%5D=publish_date.desc