"The Squirrel of Judgment Wonders Why You are not Creating Art."

"Do not Disappoint the Squirrel of Judgment."

These were the last words flashed on the screen behind Art Liestman at his turning demonstration for the Carolina Mountain Woodturners. They might have opened the program. They set the tone for the eclectic talk and the eclectic work of the fellow from suburban Vancouver, Canada. When Liestman was turning during the morning, most of the time was spent discussing the lost-wood process. Put simply, this is a matter of creating a sandwich of three layers with the waste in the middle and the good wood as the bread of the sandwich. The middle waste block will be sacrificed and the usable good pieces of wood will be glued together to create a shape which is rounded, but not entirely round, more a football or almond shape. In the afternoon session Liestman discussed "therming." In therming, the turned pieces are done on a jig and are similar to barrel staves. An article in the August 2012 American Woodturner best describes this process.

Despite the whimsical nature of Liestman’s work--and seemingly of his outlook on life--the talk and demonstration were serious and detailed. For example, when talking about making the glue blocks, he discussed using unwaxed brown paper, like a supermarket bag, and reminded the group not to use the printed portion of the bags, which might leach into the wood. He also pointed out that the center of the work should be the middle of the sacrificial wood of the glue blocks---so that the wood used in the finished product would be symmetrical. This, rather than centering the work or on the total glued up block.

The morning began with a slide show featuring Liestman’s "puzzle illusion" pieces, which were decorated to appear to be jigsaw puzzles, sometimes with a piece or two missing. The jigsaw theme also extended to turned pieces cut to appear to be free standing parts of a jigsaw puzzle. The slide show included wall hangings and his whimsical teapots and tea "pods". These included puzzle decorated pods, and some resembling creatures--dare we say rats. Some of these were "thermed." Each pot body is one piece of wood with four (4) turned sides. (There would be slides of many more teapots, functional and otherwise, by many different artists later in the program.) It should be pointed out that many "teapots" couldn't hold water. 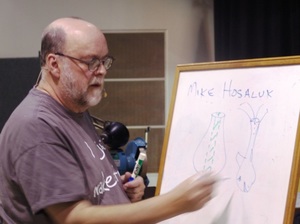 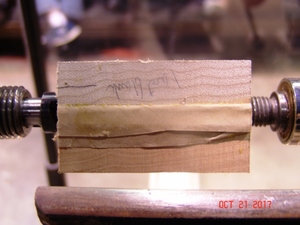 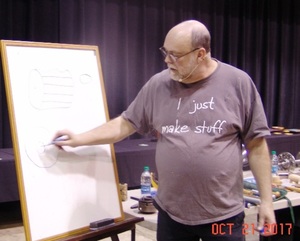 The demonstration of the making of the lost wood box pointed out that contrasting wood should be used for the center glue block. Liestman said he used almost exclusively big leaf maple for his pieces because it is readily available in Vancouver. From the slides it was apparent that the available wood was sometimes highly figured or burl. Having previously glued the blocks using yellow glue and paper, he turned the round object. He then used a small box cutter type of Japanese saw to complete the parting process.

Liestman placed a chuck on the spindle and mounted the lid portion of the blank in the jaws. The face of the piece was trued up using the side of a parting tool as a scraper. He hollowed the lid and formed the mortise to fit the bottom he turned using the parting tool. The mortise needs to be cut parallel to the lathe bed. He marked the depth of the lid on the outer surface so that later when he formed the top he would not perforate it. Then the top was removed from the jaws. The base piece of the box then went into the jaws. Its face was trued up with the parting tool. Using a depth drill, he drilled to the required depth. Then he formed the joint to fit on the lid. He did this before hollowing.

Once he achieved a proper fit, Liestman hollowed the base. To see the wall thickness from the opening of the box to the base he drills several holes through the wall in the center waste block wood. This allows checking wall thickness throughout the hollowing process. The holes also let chips come out during hollowing. He turned the wall to about 3/16 to 1/4 inch thick. A parting tool is used to mark the bottom level of the base. He achieved the final fit of the lid and base. Liestman placed a thin paper towel between the lid and base to give a tighter fit. He fitted the lid on and brought up the tailstock and finished the outer surface of the box with the roughing gouge and did any shaping. This is the time for sanding, although for the demonstration there was no sanding. The tenon was parted off the lid. He removed the base from the chuck.

Using a chisel and a mallet, Liestman separated the pieces along the glue lines. The flat side of the chisel should be to the good wood side. He discarded the waste wood. When splitting the brown paper, some remains on both sides of the split. This needs to be carefully sanded away. Then the two halves of the lid and the bottom can be glued together forming an almond shaped box. When sanding it is important to be careful not to take too much wood off one side or else there will not be a proper fit of the two halves.

Using this same technique, one could make a hollow form with no entry hole by hollowing through a hole in the waste wood and then gluing the two halves back together. In the above lost wood technique, it may be important to match the grains of the two halves.

During the afternoon session Liestman concentrated on therming, or making barrel stave type pieces on an elaborate jig designed for the purpose. He said the technique was originally used for making four-sided table legs. The custom-made jig he used actually resembled a barrel, once the wood blanks were screwed in. Liestman has an article in the April 2010 volume of "American Woodturner" that gives details of the turning process. It shows a jig fashioned from wood. In any event, if turners want to follow suit they should refer to the article and follow up with Liestman's demo disc, which will soon be available in the club library. In brief, three pieces screwed into the jig are turned on one side, removed, and remounted after being turned 180 degrees. The process is repeated until the blanks are turned on all four sides. 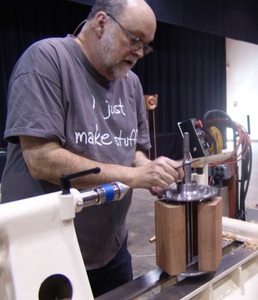 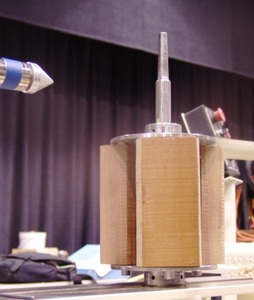 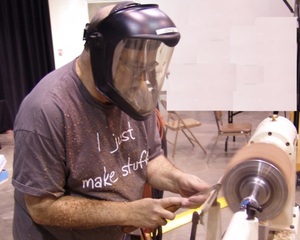 A good example of the desired effect is the "Helga" teapot, inspired by the "Hagar the Horrible" comic strip character. Except for the top and bottom, everything on the piece is curvy---but nothing looks as though it was turned on a lathe. "Therming" ("Don't worry about the name; it's the process") permits the turner to get an even more gentle curve than does the "lost wood" process. The "thermed" pieces are augmented with contrasting trim pieces. Ebony is a favorite.

Liestman introduced the group to "cold bendable hardwood," a wood that is compressed while still green, which bends without being steamed. It allows fabrication of teapot spouts and handles. The outfit that sells it is Pure Timber LLC; they can be found at http://www.puretimber.com. A quick look at the website shows "sample kits" for $45. But these pieces must be resawn for use as trim on teapots and such.

Along with pretty woods, Liestman makes generous use of texturing, coloring, burning and whatever. He has a stone surface texture. He also features his "ancient towers", a texturing process which begins with saw cuts all over the piece, and progresses with chipping bits from between the saw cuts with a screw driver. He uses three different finishes – scorched with a torch, bleached, or colored with graphite. (View the pictures on Liestman's website. The result is far more striking than my word description.)

Liestman paid homage to Jack Vesery, Frank Sudol and Michael Hosaluk during his presentation and included the work of several others in his slide show. We thank Art Liestman for traveling across the continent to share his eclectic work.