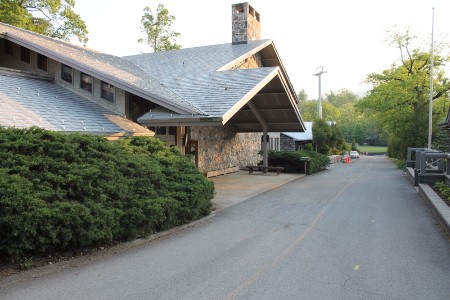 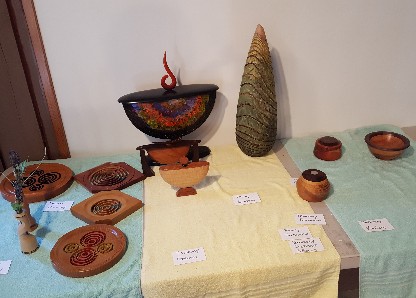 The weekend began sedately as the intrepid travelers arrived…….toting all things important to a woodturner, as well as the remains of peanut butter sandwiches ……which had been lunch along the way. Slowly they found their rooms and unloaded their goods. And then it began.

Bowls and boxes and vases, oh my! Which class to attend? Classes ranged from reviewing the fundamentals of tool sharpening/basic cuts, to new techniques for making a lidded box , a ringed bowl and a bud vase, to one of Jim Duxbury’s engineered feats, to fun and colorful embellishment.

Our travelers turned out to be wood turners. People who took chunks of wood and ‘turned’ them into objects of beauty, function, form, color and then……oops it was one piece and now it’s not. But, look what they learned doing it.

Some report that they come because of the great group of people who share ideas, help each other learn AND clean up. People who are of a like mind……you know, those who just like wood. Like to handle it, smell it, look at it, work with it. Crazy, huh? 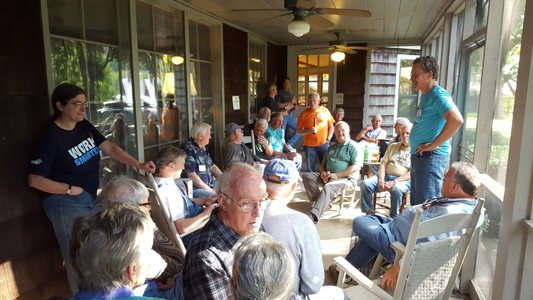 But in and around making new friends, getting to know other members better and drinking that ‘potato wine’ was some learning. We learned that everyone likes chocolate chip cookies, that it is good to try something new, that everything doesn’t have to be ‘round and brown’, that cedar smells good but is brittle and cracks easily.
We learned that a little segmentation can result in a great rim on a bowl, that ‘weed pots’ can instead be artistic vases that hold water, that homemade dandelion wine is good? and that spiral illusions can be just that….an illusion…….but wait, after another try, it really works!! We learned simple things and complex things, we did projects that gave us ideas for additional projects, for gifts and for ways to help other beginning turners.

This learning happens because of the people who are willing to share their talent. Our instructors. 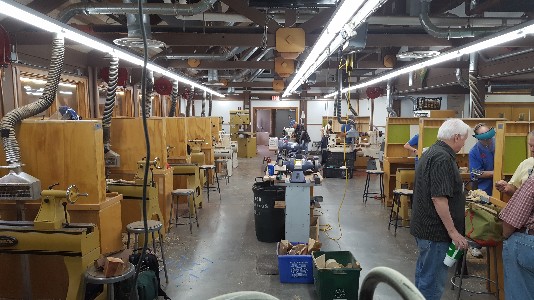 Tucker Garrison is not only a terrific turner, but is responsible for coordinating the whole shebang. He taught classes, floated between classes keeping everything running and was the general go-to person. 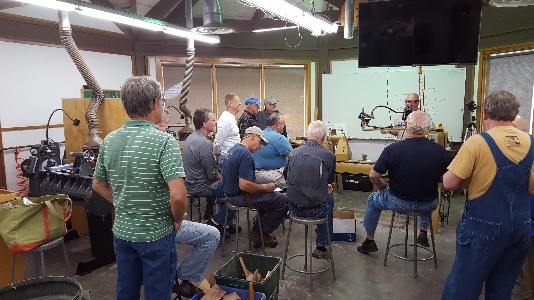 Greg Schramek was heard saying, ‘there is nothing that can’t be fixed.’ He was also heard saying ‘the lid on your bowl should have been tighter’, as he reached for his…….pulled and pulled…..and said ‘maybe I made mine too tight.” But yes, my first one was too loose.

Jim Duxbury is simply a mechanical genius. Some were thinking…..OMG…..how are we going to do that? But then, he presented his layouts, detailed instructions, expert preparations and voila. It works!

Alan Carter is not only a turner, but a super artist. Having supported himself all of his life with his art, he shares some of his creativity and how it is executed. Now, what can YOU do with those shapes? 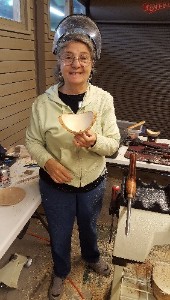 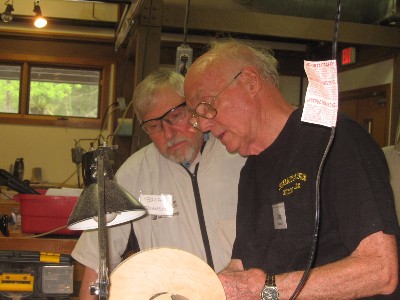 Tom Crothers is also an educated artist and an excellent turner. He has a humor and mastery of color that he often uses in conjunction with his excellent turning techniques.

Holland VanGores had his students turn a beautiful bowl of highly spalted maple………and then dig up the smooth surfaces with carving tools and then paint it! But, what magic when we took that bowl and sanded away some of the paint. Every combination of texturing and coloring was different and oh, so lovely. 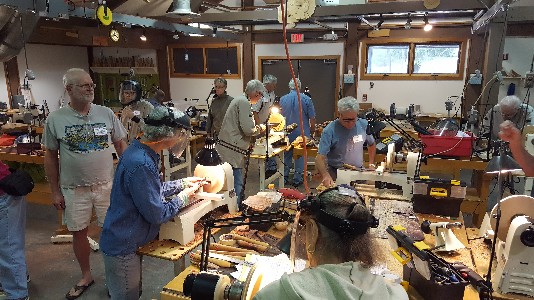 Because our instructors are all so accomplished and are able (and willing) to teach what they know, we had lots of hands on turning and they always helped us succeed at what we were doing. 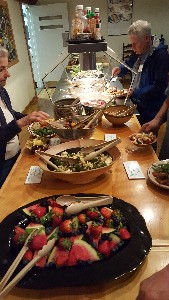 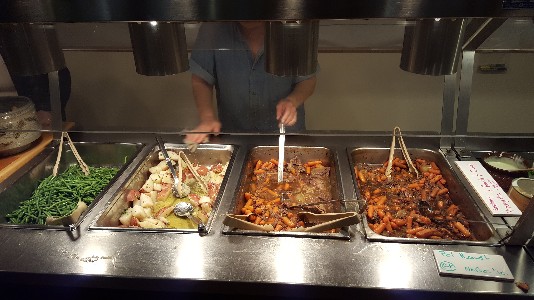 Every day was full to the brim and Bruce was there to lead us in thanking the kitchen staff who kept us fueled with amazing food and desserts. After dinner each day, some returned to the workshops and some retired to the porch for talk and ‘refreshments’.

But in the end, if we were ready to go home, or if we were wanting more, I think we all would agree with the member who said, “CMW retreat guarantees a legacy of continued woood turners!”

We hope you will join us next year.