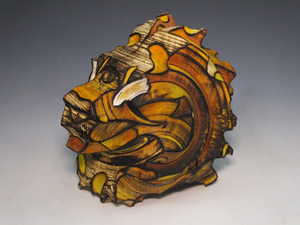 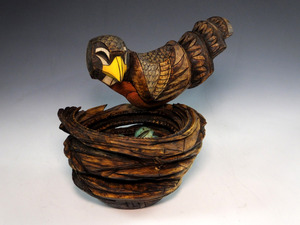 (Photos from the demonstration will be added soon)

Derek was born in 1982. He has dedicated the last seven years to exploring lathe-based sculpture. He works in rural Southeastern Pennsylvania, where he lives with his girlfriend who has been with him for the entirety of his sculptural pursuits.

His approach involves multi-axis turning as a foundation for his work. By using the unique shaping process of turning Derek has created a descriptive visual language that only the lathe can speak. This carving process creates novel representations of a wide range of subjects, from those based on human anatomy to various animal forms. Derek works from a basic question, “What would this look like if rendered through the lens of a wood lathe?” and even with the most rigorous naturalism, an honest abstraction takes place, and for each new subject that question gets answered. So from human heads to rhinos, mandrills to birds, each idea is being captured in a way it has not been expressed before.

Derek opened his demo by asking the CMW members what type of head figure they would like him to turn. Because of the season a “Santa” head was chosen. He then discussed some aspects of the turning process. The first axis and the first shape are most important because all subsequent axes and shapes are dependent on it. He drew a profile of a “Santa” on the white board and divided the sketch in half from the top to the bottom. This became the axis for the first and most important cut.

A piece of 6 x 6 x 8 inch Sycamore was placed between centers using a safety drive center. It was roughed into a cylinder. Because the wood blank had been waxed the safety center slipped. To remedy this Derek used a torch to melt away the wax. The rim of the hat, the nose and the beard were the high points of the profile and these were shaped first. His cuts were rough and he leaves tool marks on the finished form. Once he gets details that look like what he wants he moves onto the next axis and subsequent details.

The piece was removed from the centers of the first axis and a second axis was chosen to shape the back of the head. This axis was markedly off center. By observing the profile of the piece as it turns Derek can tell what material will need to be turned away. The desired areas were then removed with the lathe at a very slow speed. He then shaped the back of the head and some hair details. When turning one needs to stop the lathe frequently to look at what has been removed up to that point and on that axis. One may need to remove more wood or maybe not but it can’t be put back on. Also, the tailstock needs to be frequently checked for tightness while turning on each axis.

Once the back of the head and the hair were shaped the axis was then changed. This new axis was nearly perpendicular to the previous two. When asked how many axes would be used to shape the piece Derek said about six - give or take. This new axis permitted him to turn the area of one of the eyes. The marks left by the centers are kept and not turned away. They, like the tool marks, become part of the final form. After choosing the axis Derek draws the area that will be cut by turning the lathe by hand. Then when the lathe is turned on the area to be cut can be seen. The axis was then changed to develop the area of the other eye and the other side of the nose area. Repeated stops were made so that just the correct amount of wood was removed. The axis for the eyes and the subsequent wood removed needs to be dead on to get the best results. Another axis was chosen to form Santa’s mustache and mouth. This was turned and the piece reversed so that the other side could be turned. A safety note: When off center turning (multi-axis) you can place a flap of tape on the piece. If that tape touches you during the turning process you are getting too close to the revolving wood. This can prevent a nasty injury.

The centers were again changed so that some wood would be removed from the base of the beard. Then a portion of the hat was removed. When wanting to remove an area of wood, have the center as far away from that area as possible. Also, before actually cutting on a particular axis one needs to rotate the lathe by hand to be sure of having all the proper clearance. Then another axis was chosen to taper the hat. This axis was severely off center. The tool was slowly eased into the wood. One does not have the luxury of rubbing or riding the bevel. The axis was reversed so that the other side of the hat could be tapered. This completed the morning session.

Derek continued working on the “Santa” head that he began in the morning session. He placed it between centers and used the mini Arbortech to do detail work. The areas to be cut were drawn out and then cut. The cutter was simply pressed against the area to be cut so that the cuts were circular and thus kept with the theme of circular lathe cut patterns. The head was removed from between centers and a blowtorch was used to burn all the detail edges. This cleans up the fuzz and resolves all the tool marks. It also prepares the piece for further detailing and coloring.

Derek uses Pentacryl on most of his carvings to prevent checking and splitting. He soaks the pieces in it. The wood is somewhat discolored by the Pentacryl and also seems to get harder. Therefore Derek uses it after the turning/carving process.

Further details were completed using a woodburner such as the Detailmaster. Derek makes his own tips which are very cost effective. Most of the burning simply highlights details that are already there. Derek colors using Copic (ciao) markers. All the grain shows through the coloring. Besides the markers Derek also uses acrylic paint to decorate certain areas of his pieces.

Derek textures using an NSK Carver. He uses a Dremel cutter in the NSK. This cutter is like a dry wall cutter.

This completed a very interesting and information demo.