David is from Spartanburg, SC. He is a member of CMW. His work, which is unusual and distinctive, is in various galleries including del Mano. He demonstrated at the North Carolina Woodturning Symposium in 2009 and specializes in turning Banksia Pods and hollow forms.

The Banksia tree grows up to 30 meters tall. They grow in Australia and New Zealand along coastal areas. The pods grow in an upward direction in contrast to pinecones. Very attractive flowers grow from the pod’s surface. The seed follicles in the pod’s wall release their seeds only when the pod is exposed to fire. There are various Banksia trees that produce pods with different shapes and textures. 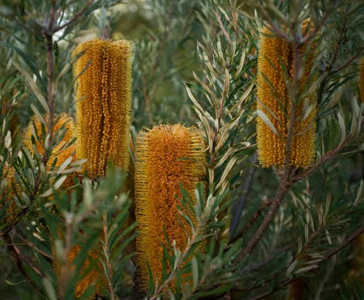 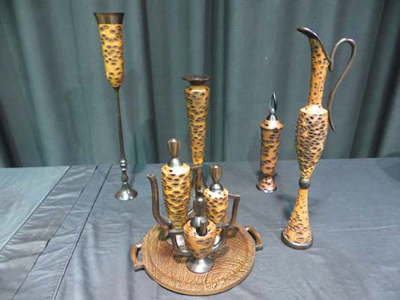 To accent his pieces David uses African Blackwood. He showed various examples of his early work including his teapot sets. He draws lots of designs before actually turning a piece. David obtains his pods from Bad Dog Burls, Cormark and various internet providers. He selects pods based on the design of the piece or set of pieces he plans to create. He begins by cutting off both ends of the pod. The centers have pith. A hole is drilled in the center so it can be placed between centers. David used a bowl gouge to remove wood from the outer parts of the pod. He wears a mask to prevent inhaling the Banksia dust. Shavings are not produced – mostly chips and dust. Lathe speed is adjusted to a speed that is just below too fast. Light, gentle cuts are used to prevent chipping. A fuzzy layer is exposed as the turning progresses. 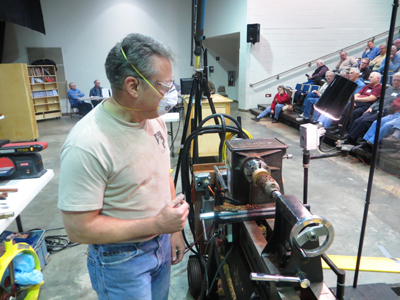 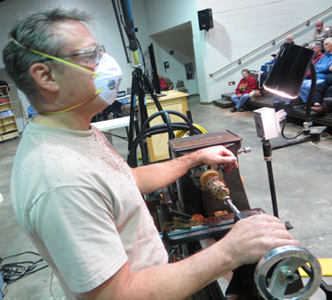 David trued the blank up in preparation for using a glue block. A tenon was turned on the headstock end of the pod. It was made just a bit larger than a 1” Colt Forstner bit. A parting tool was used to make the tenon. The glue block was placed in the jaws of a chuck and trued up. A 1 inch hole was drilled using the Colt bit in the glue block to accommodate the tenon on the pod. Thick CA glue and accelerator were used to attach the glue block to the pod. The opposing surfaces of the glue block and pod need to be flush. Once in the glue block the tailstock was brought up and the pod further shaped. The shape of the final form was determined by the pod’s irregularities: i.e., velvet, voids, etc. The waste area on the tailstock end was parted off.

The hollowing process was started with the Forstner bit – the same size as used for the tenon. The opening needs to be large enough for the hollowing tools. The tailstock was brought up to be sure the piece was running true. At this point the Banksia pod holes need to be stabilized. Thin CA glue was used to fill all the cracks around the holes. The exterior of the pod was basically flooded with the glue. It was left to nearly dry before sanding was done. The sanding produced dust that went into all the cracks. David began by using 150 grit paper. If the holes had debris in them they would be cleaned out before gluing. Usually the glue process needs to be repeated once or twice to completely fill the cracks. Hollowing was then started. Bulk was left in the lower part of the pod for stability. David used a steady rest to support the piece. Before bringing up the steady rest he brought the tailstock up to be sure the piece was running true. The piece can be taped to prevent marking by the steady rest. Once the pod was trued up the hollowing system was set up so that the cutting tip was on center. David shoots for a 3/16 inch wall thickness. This completed the morning session. 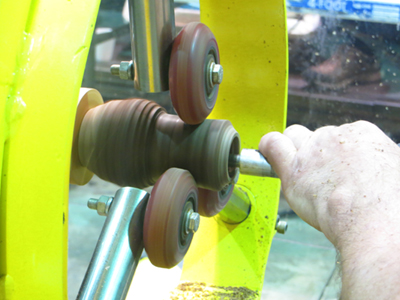 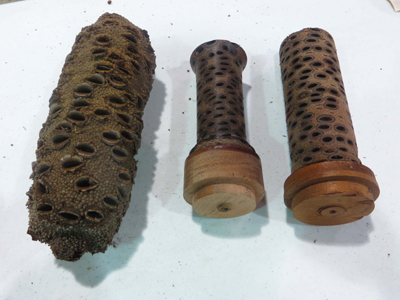 David began by continuing the hollowing process. He was going to use the laser but it was not functioning so he decided to show another method. He used the Jameson hollowing system without the laser. Wall thickness was measured three ways. The first was to measure the depth of the holes to the interior wall. The second was to use a light that illuminated the thickness. The third method was to use a nail protruding from a piece of wood. The nail was placed in the hole to determine the depth and thus wall thickness. The holes can be cleaned with modeler’s files. This cleans out debris such as shavings and CA glue. 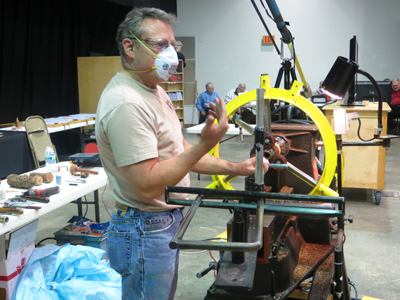 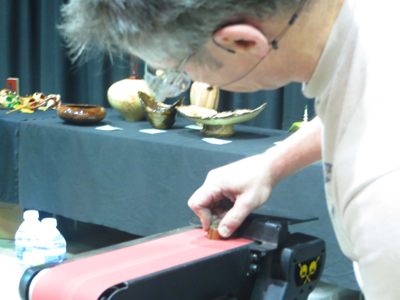 Next, David turned to spout making. A glue block with a tenon was placed in the jaws. Attached to the glue block was a cylinder (about 1” diameter and 8” long). It had a hole drilled the length of it. This would become the spout. David decides which side of the grain will be the side of the spout. The cylinder was then divided into sections and numbered in sequence. A Chris Stott parting tool was used to separate the sections. The thin parting tool was used to lessen the amount of wood removed. Next, the sections were sanded on a belt sander to achieve the proper bend of the spout. The numbered sides were lined up so that the grain would be continuous along the entire spout. It is important to have flat surfaces on each piece to produce a good glue line. David uses yellow glue for all the joints. The exception is the glue block.

The next step is how to attach the spout to the teapot body. It is done slowly using a Dremel tool. It is important that the wall of the pod/pot is drilled to correspond to the hole in the spout. This completed the afternoon session and an excellent, very informative demonstration.

A DVD will be available in the club library in March 2013.
Bob Gunther