Doug is a full-time artist and lives on Vancouver Island, Canada. Since 1992 he has been involved almost exclusively in creating some form of art, including painting, stained glass, photography, pen and ink drawing, and woodturning. Wood sculptures, primarily made using a lathe, have been the focus of Doug’s work since 1997. When not in his studio he can often be seen performing in theater productions.

Prior to becoming a full-time artist, Doug taught skiing and sailing, was an ironworker, a driller and blaster in several underground gold mines, and delivered sailboats in the Pacific Northwest, the Caribbean, and across the Atlantic Ocean.

Doug has been creating thought provoking and inspiring works of art by combining artistic vision with superb craftsmanship. He exhibits his unique style of woodturned sculptures internationally and is sought after as a demonstrator. He teaches and his works are in private collections around the world.

Doug began his demo with a slide show depicting his work. He incorporates native imagery into his pieces. He began his woodturning career turning functional pieces such as bowls, spatulas and honey dippers. He then began using colors (e.g. Ferric chloride). He also made many small hollow forms. Acrylic paint has been used to color many of his pieces. He has done large vases with carved panels decorating the exterior. Wall hangings have become a part of his work. They have turned and carved designs both on the front and back surfaces. Not all of Doug’s work is turned. Some pieces are entirely carved. He also showed some of the steps in his harvesting of wood – sawing into slabs and then drying, then cutting blanks in preparation for turning, carving and coloring. This completed the introductory slide presentation.

Next Doug began the turning portion of his demo. He generally turns maple and maple burls but also some red and yellow cedar. He uses stainless steel hex head screws for his faceplate screws. 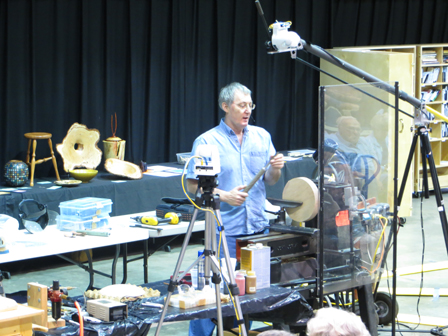 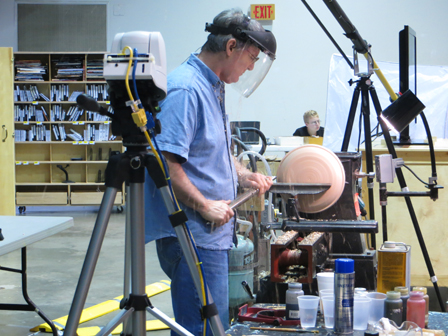 Doug mounted a 2” thick x 12” diameter blank on a faceplate. He used a homemade center finder to mount his faceplate on the center of the blank. He uses OneWay tools and handles. He first turned the face (rear) of the piece which would be against the wall when the piece is completed. He turned a slight dome shape on the surface so that his vacuum chuck could fit in various positions for achieving his offset turning. The surface where the chuck will hold the piece needs to be smooth. Outside that area the surface can be anything. Outside the chuck area Doug turned some other design elements (a series of grooves). The chuck area was then sanded with 180 grit paper in both forward and reverse lathe directions. By sanding in two directions one gets a smoother surface than by going only in one direction. Doug then cut some grooves in the center area that will not affect the vacuum seal when the piece is reversed. 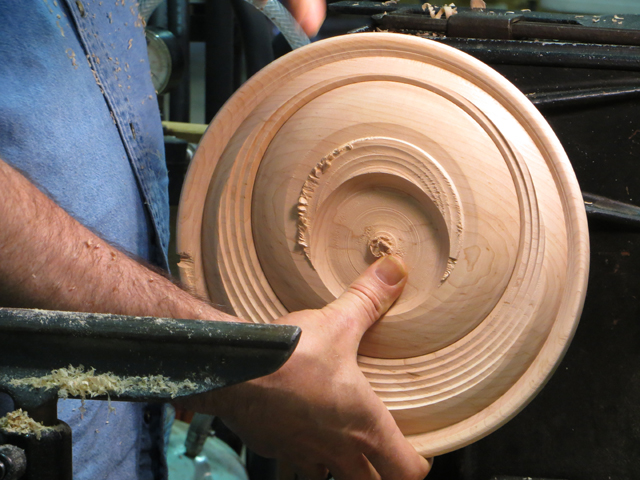 The piece was removed from the headstock and the faceplate. It was reversed and placed on the vacuum chuck with the previously turned side facing the headstock and against the chuck. Doug began with the piece on center. It is important to have a vacuum gauge to show what negative pressure is being generated and thus how well it will hold the piece on. Doug put it on center so that he could remove the faceplate screw holes. These were removed by turning a shallow bowl shape. He cleaned up the face and rounded the outer edge forming a bead. He then turned a series of rings on the outer surface of the face. These he called “elements.” He got a “catch” while turning the outer ring and a small portion of the rim chipped out creating a design opportunity that would be later dealt with in the design process. By shifting the piece on the vacuum chuck one can retain a nice figured area or eliminate a flawed area. When off-setting a piece be sure the tool rest does not hit the piece as it turns. Also, adjust the lathe speed according to the degree of offset. Two offsets were turned. Sharp details were achieved using a spindle gouge and a very small detail skew. The skew made details such as a V-groove very crisp appearing. All turning and sanding on one offset needs to be done before changing to the next. For each offset a series of concentric rings were turned. A dome was turned in the center that would later add to the design of the piece.

In his shop Doug turns a number of pieces. Later he carves and colors them but, while turning, he does not know or even contemplate what the final results will be.

Doug presented a brief power point show depicting his design processes such as drawing the design on the wood and the presentation of the piece when complete. He also showed various texturing techniques such as using air tools, rotary carvers and wood burners.

A question was asked: “How do you do the offset turning as was done in the morning session without the availability of a vacuum chucking system?” Answer: Doug turns a curved surface on the base of the piece as was done in the morning piece. He then uses a section (1/2”+) of PVC pipe (3-4-5 inches). This is placed between the faceplate and the piece. As long as the section of PVC pipe stays on the turned curved surface one can move the piece around to almost any offset one wants. This can be achieved with a piece of MDF or plywood placed on the faceplate to essentially enlarge it and give more surface area for attachment of the piece. Various length faceplate screws may be needed during securing for the various offsets. 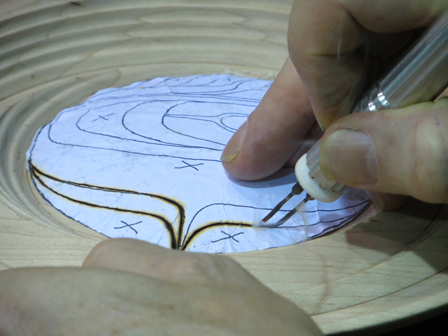 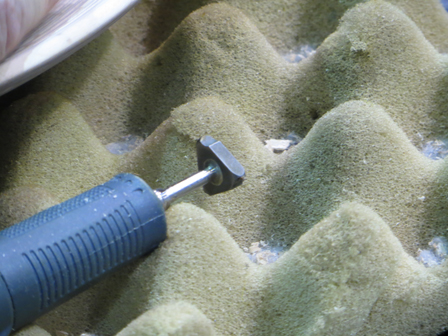 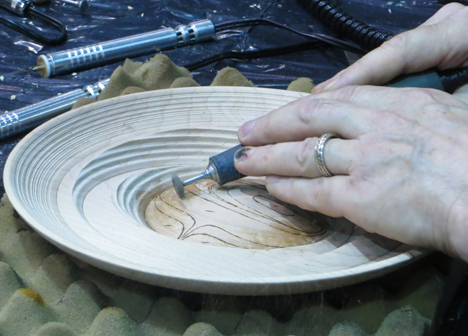 Next Doug used the turned piece from the morning session. He measured the center dome area and cut a piece of paper out to that size. He drew the design on the paper and then crinkled up the paper. It was then smoothed out and placed over the dome using spray adhesive. The crinkling process compensates for the curvature of the dome and makes it easier to apply the design. The design was then burned into the wood through the paper. A Detail Master 10c writing tip was used. One should use vented handles on the burner. These do not get too hot to use for any normal period of time. The tips are dedicated to the handles. They need to be sharpened prior to use and also annealed prior to using the first time (turn the heat up high so the tip gets red and then let it slowly cool off). While the design paper was still in place those areas that will be carved were marked with the burner. Once all the lines were in, the solvent for the adhesive was applied and the paper with the design pattern removed.

A Mastercarver combo unit was then used to carve out the required areas. Rotary burrs were used. Carving was done in those areas that were previously marked with the burner. A larger bit was used initially and then progressively smaller ones. The depth of cut was about 1/16 inch. After the initial rough carving a grout cutting tip (Dremel) was used to enlarge the already carved areas and get close to the black burned lines. Next a dental burr in a NSK Presto handle was used that was air powered at 400,000 rpm. This permitted getting even closer to the burned lines. A #8 round bit was then used to eliminate the burned lines and texture the carved out areas. A very fine tip burr was used to detail the thin carved areas. All the bits and burrs can be cleaned with resin remover (available from Lee Valley).

The woodburner was again used (6a tip). The edges of the carved areas were outlined giving them a crisp appearance. The remaining areas of each carved potion were textured using the burner. The burner tip needs to be cleaned frequently to remove resin. Next a 10c tip was used to further burn and deepen the previously burned design lines.

Doug then turned the piece over and textured the back using a carbide cutter with three cutting edges. Lines were textured toward the center of the piece. Next he used Speedball black India ink to color the entire piece, front and back. Once the ink was dry a flap sander would be used to remove the ink on flat surfaces. The flap sander is not used on the front center design because that would round over edges and eliminate crisp appearances. One’s eye looks first at crisp details and light colors so Doug forces people to look at the centers of his work. 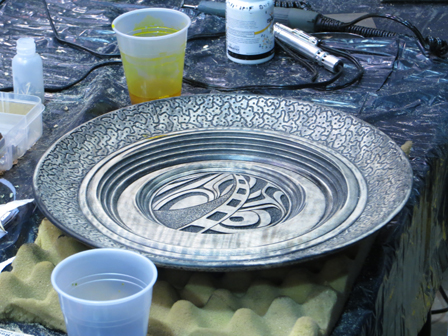 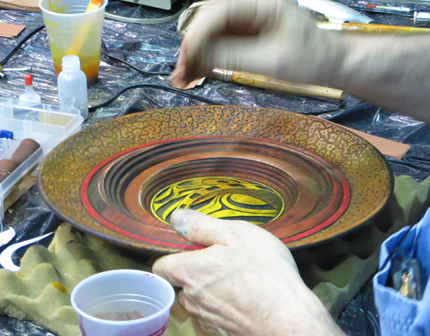 Mohawk aniline dyes (red-yellow-blue) were used. They are powder and Doug mixed them with water. Water based dyes will raise the grain so at home he uses pre-mixed penetrating stains in addition to alcohol based powder dyes. The piece was completely covered with yellow dye. Doug used a combination of colors to apply to various parts of the piece to create unique colors that are indicative of his work. A hair dryer was used to dry an area before another color was applied.

Sanding (180 grit) was done over the dyed areas to produce highlights. Once all the colors were applied and dry the entire piece was again given a light coat of yellow dye. Once dry the piece was lacquered. Enough coats are used to give the surface a smooth appearance. Satin spray was used. This completed the turned, carved, colored wall hanging and an excellent demonstration.