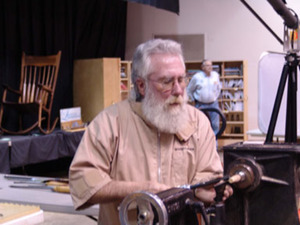 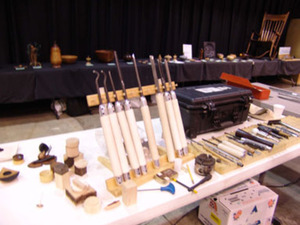 Mark St. Leger is a career carpenter/cabinetmaker; who, for the past 23 years, has been teaching high school woodshop. He has incorporated his creative turning into his student classes. He is a very active demonstrator and workshop leader for woodturning clubs. He first demonstrated for CMW in June of 2000 and again on Nov. 15, 2003 and Feb. 21, 2009. He has served as a board member for the AAW in 2003. He demonstrated at the NC Woodturning Symposium in 2011 and has demonstrated at AAW Symposiums.

Mark specializes in small-scale turnings, off-center work, boxes, thread chasing, and tool making and design. He is very enthusiastic to share with others what he has learned throughout the years.

Mark began his demo with spin tops. For the first top he drilled a ¼ inch hole through the center of a quarter held in the jaws. The small burr left on the quarter was removed with a pen knife. The chuck was removed from the headstock and a piece of hard maple was gently hammered into the headstock Morse taper. The piece was 5/8” x 5/8” x 3.” Before placing the piece in the taper the edges were chamfered off with a pen knife. The piece was then rounded into a cylinder using a 5/8” roughing gouge made by Doug Thompson. The stem portion was turned down to about 1/16” diameter. A tenon was turned to accept the quarter with the ¼” hole in the center. A tight fit was achieved. The tenon was undercut so the CA glue, when applied to hold the quarter in place, would not push out when the quarter was pressed on. The top was then sanded (150 grit to 600 grit). It was parted off with a skew. Once parted off the quarter was pressed on. This completed the quarter top. 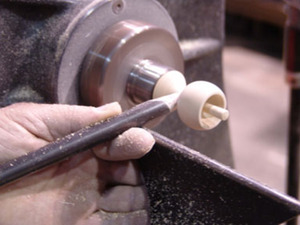 Next Mark turned two lidded boxes. The first was an acorn box. The chuck was placed back on the headstock. The blank used was a piece composed of zircote and maple – 1” zircote and 2 1/2” maple glued end to end and 1 ½” square. Yellow glue was used. First it was diluted and applied to the end grains to partially seal them. After 3-4 minutes full strength yellow glue was applied and the pieces rubbed together until they “grabbed.” This gives a solid end grain/end grain glue line. The maple end was placed in the jaws. It was roughed into a cylinder. The cup of the acorn box (zircote) was shaped with a spindle gouge. The base of the cap was at the tailstock end. The basic shape was achieved before hollowing of the cap. It was then hollowed using a Hunter carbide tool. The inside was undercut to get a sharp lip. This will help when fitting the top to the base.

Once hollowed the top was further shaped, sanded and parted off. The opening into the top was measured and a tenon turned on the bottom (maple) portion to match the opening of the top. Once a tight or snug fit was achieved the top was sanded. It would then be waxed. The body was shaped and made 1” long. The tailstock was brought up. A ½” hole was drilled into the body to open it up before hollowing. It was then hollowed as was done on the top. When hollowing go in on center and begin hollowing with the cutting edge atabout the 7:30 position, then raise the cutting edge to 8 or 8:30 position for an efficient cut. Again, the Hunter carbide tool was used. The base was further shaped and then sanded. Don’t sand too much or the fit achieved earlier will be ruined. It was parted off. The opening of the bottom was measured and a tenon formed on the waste block to act as a jamb chuck. The bottom was placed on the tenon and further shaped and sanded. Use a slower lathe speed when sanding. The top was then fitted on the body. This completed the acorn box and the morning session. 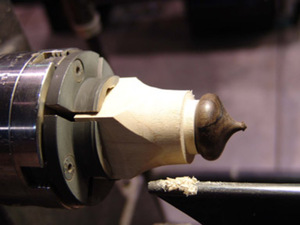 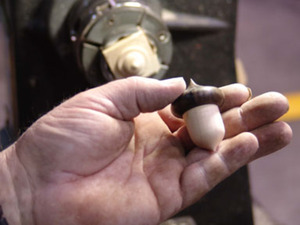 Mark began the afternoon session with a square lidded box. Blanks were prepared ahead of time. They were 3 ½” x 3 ½” x 1 ½” thick. The outline was shaped using a band saw. The edges of the blanks were textured using a rotary cutter, a small flap sanding disc and a butane torch. The center of the piece was marked with a spring loaded punch. The chuck jaws were closed tight. The blank was held between the live center and the jaws. The tool rest was brought up at a 45 degree angle. The bottom of the box was shaped (tailstock end) and a tenon turned to go in the chuck jaws. The tailstock was removed and the piece was placed in the jaws. The top of the base of the box was then shaped. An ogee shape was transitioned toward the center where the box opening would be. Shaping was continued until the edges of the base were about 3/16” thick. The center portion was further shaped.

A final surface was achieved using a Hunter Hercules tool. This minimizes sanding. The base was hollowed. A ½” Forstner bit was used to initiate hollowing to about 3/8” deep. Further hollowing was done with the straight tool to remove the impression in the bottom left by the drill bit. A hook tool was used to undercut the interior of the box. A small round skew was used to clean up the edges of the entrance of the hollowed out area. This completed the hollowing. Sanding would be done with the lathe stopped. The piece was removed from the jaws and a block of wood placed in the jaws to be made into a jamb chuck. Besides fitting into the hollowed portion the jamb chuck needs to be shaped like the upper box surface in order to provide enough support when turning the bottom surface of the base of the box. The piece was placed on the jamb chuck and the tailstock brought up. The bottom was shaped by using shear scraping. The live center was removed and the base completely finished.

Mark leaves the base convex in shape so that the box can rock when in place. Sanding was done to 600. This completed the base of the box. Next the lid was made. A piece of cocobolo was placed in the jaws and turned into a cylinder. The opening of the base of the box was measured and a tenon turned on the lid piece. The lid was undercut with a skew so that the lid fit the face of the top surface of the base. The lid was then parted off. This completed the portion of the lid that will insert into the base and hold the finial that will be made shortly.

A hand made wood collet chuck was used to hold this portion of the lid. The collet was made from a piece of maple 2 ½” x 2 ½” x 36.” A table saw was used to cut a kerf into the length of one side of the piece but shy of the center then the piece was cut into 7/16” segments – each becoming a collet. One of the segments had its center marked and it was placed between the live center and the closed jaws. A tenon was turned on the collet to fit in the jaws. After placing it in the jaws a ¼” hole was drilled into the center of the collet. This hole was then expanded to accept the tenon on the lid piece. The jaws were then tightened to hold the piece. A skew was used to clean up the surface of the lid. The shape was made to compliment the ogee shape of the base. A 1/8” hole was drilled into the lid piece – 1/8” deep. The piece was then sanded and completed. Mark next made a finial using maple. A piece was placed in the headstock spindle as done for the top earlier in the demo. It was roughed into a cylinder and the finial turned using a spindle gouge. A 1/8” tenon was turned on the finial after it was sanded. The finial was fitted to the lid piece and the box completed.

Next Mark made a threaded lidded box using cocobolo for the lid and boxwood for the base. He began with the lid. A previously prepared round piece with a tenon was placed in the Talon jaws. It was hollowed about 3/8” deep. In the bottom a recess was cut on the side wall so that the thread chaser did not cut all the way to the bottom. The walls need to be straight.

Mark does not use the traditional thread chasing technique. He uses a flat tool rest to hold the chaser. The chaser needs to be above center (for female threads). This is so that the chaser cuts only at the top of the teeth thus preventing tear out. To also enhance cutting and cut down on tear-out Mark waxes the area of the threads. This is done frequently during the chasing process. Lathe speed is about 150-300 rpm. He first strikes an area with the female chaser and then lets the tool feed itself into the threading process. This completed the internal lid threading. The inside was then finished. The boxwood base (also previously turned with a tenon) was placed in the jaws. The area to be threaded was turned about 1/16” larger than the opening in the lid. A small recess was turned at the base of the area to be threaded. The flat tool rest was set below center. Threads were chased until a good fit was achieved with the lid. Unfortunately the threads proved to be unsatisfactory and Mark chased another lid and base which were fine. The base was then hollowed to about 5/8” deep.

The lid was placed on and the tailstock brought up with a drilled out golf ball attached to press up against the piece to give support. Once the exterior of the box was shaped the tailstock was removed and the top of the lid turned and sanded. The top and base were then separated. A small step was made on the base piece where the top and base met when screwed together. A jamb chuck was turned to accept the base of the box. Again, the tailstock was brought up with the golf ball for support and the base shaped. The tailstock was removed and the bottom of the base was textured with a spiraling tool. The top and bottom were placed together. This completed the threaded lidded box. 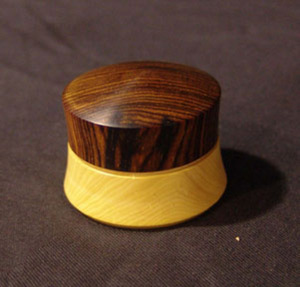 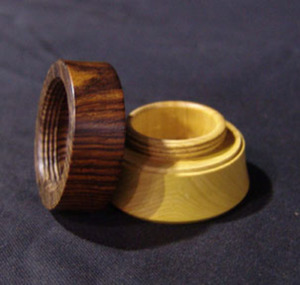 It was a great demo - besides it being very informative, everyone had a good time. Jim Nunziato in the audio section outdid himself. We will remember this demo for a long time. Much of the information in the demo is on Mark’s web site: http://www.markstleger.com